Glide through the breeze on a majestic steed. Riders of all ages can enjoy this quintessentially English Victorian funfair classic.

About the Jubilee Steam Gallopers

The oldest ride we own, the Gallopers was built in about 1895 by Robert Tidman & Sons in Norwich; when it was new, this would be the fastest most people had ever travelled.

The beautiful Gallopers is the centrepiece to Carters Steam Fair – it’s how it all began, and it’s still at the heart of the family.

Fun Fact: Is this a carousel? No!

Anyone caught calling this ride a carousel gets a black mark! A carousel turns anti-clockwise and the horses are often different to one another and prancing. ‘Gallopers’ is the British term for this ride which turns clockwise, most likely because we drive on the left, so when ladies would sit side-saddle they would face outwards.

The Gallopers is a gentle ride and is suitable for all ages (small children should be accompanied by an adult). It costs 5 tokens per person to ride. A brief history of the Jubilee Steam Gallopers

When John and Anna Carter bought it in 1976, the Gallopers was in poor condition and needed a lot of restoration, which was a work in progress between seasons for a few years. Most of the horses are carved from wood by Andersons of Bristol around 1910, and are subtly different to one another. They are all named for friends and family on the fair.

The Gallopers came to us without its original steam engine, and was operated on electricity at first. Bizarrely, we heard that a friend had a Tidman engine of unknown heritage just down the road in Maidenhead – everybody was amazed when it was lowered straight in and all the bolt holes matched up exactly! We can’t be certain that it is the original engine, but it seems pretty likely.

The 46-key Gavioli organ (c1900) was bought from Roger Daltrey in 1979, and provides that unmistakeable fairground atmosphere. It is said that a set of Gallopers is best run by a family, and you can see just by looking at it that it is very much loved. The start of the fairground career of every member of the Carter family, this ride is believed to have worked virtually every season since it was built, providing eight families with an income!

Want to know more about the Gallopers? Buy the book here. 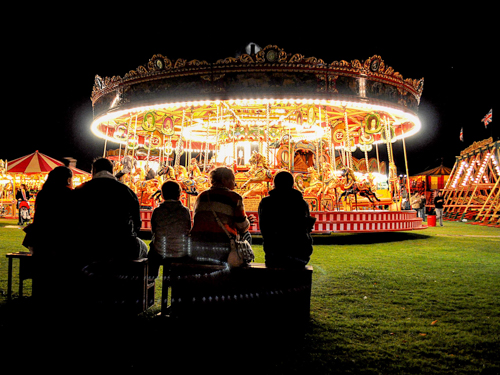